Lights in the ocean

Many underwater creatures, especially deep sea dwellers, glow or light up. Some produce phosphorescent light from bacteria in their cells, but most produce bioluminescence from chemicals stored in their bodies. Marine creatures have many uses for the light. They camouflage themselves, attract prey or mates, confuse or frighten predators, communicate, and simply light up their world so they can see better.

Why study sea creatures and their environment?

The study of the sea and its inhabitants is very young (the earliest explorations of the deep sea were in the 1970s) and only a tiny percentage of the ocean floor has been explored. The deep ocean is as mysterious as outer space. In addition to providing food, medicine, and other useful stuff (such as sponges), marine creatures are instrumental in creating oxygen and regulating climate. The more we know about the sea and its inhabitants, the more we can conserve and protect them.

SCUBA with Prof. Nautilus. Pilot his deep diving contraption down into the depths. Photograph creatures before the oxygen runs out ! 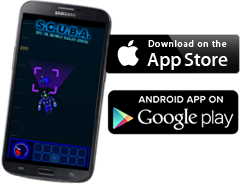 Professor Nautilus, inventor and marine biologist, has invented an ingenious contraption that allows him to explore the ocean depths. At his command, the contraption takes him from the kelp forest to the coral reef and from the bright surface to the dark and mysterious deep sea trenches. With no fear (well, maybe with a tiny bit of fear) our curious host shares his discoveries through the magic of blacklight.

The Professor spies on seahorses and shellfish in the kelp forest. He observes jellyfish, pufferfish, and a sea turtle hiding, hunting, and bathing in the coral reef. As he descends, he witnesses an octopus on a quest for food. Lanternfish, anglerfish, and hatchetfish are no match for him. But what about the prehistoric-looking frilled shark? An exciting battle rattles the Professor's nerves, and he prepares to abandon his journey. An earthquake prevents him, and he ends up deep within an enormous trench. An eerie landscape of black smoke lava chimneys and red-plumed giant tube worms is the last thing he expects. After all, the water seeping through the hydrothermal vents is much hotter than the boiling point. Surely nothing can live in this environment!

The truth is, only about 1% of the ocean floor has been explored. Who knows what mysteries await Professor Nautilus' next adventure?

Nautilus: the Greek word for "sailor", Nautilus was the name of what is considered to be the first submarine, designed by Robert Fulton in the 1790s. Author Jules Verne used the name for Captain Nemo's ship in 20,000 Leagues Under the Sea

marine biology: the scientific study of living organisms in the ocean or other marine or brackish bodies of water.

coral reef: structures built up over decades and centuries from the skeletons of tiny organisms. These habitats are home to more species than almost any other habitat on earth. Coral reefs protect coasts from strong currents and waves by slowing down the water before it gets to the shore.

deep sea trenches: deep (20,000 to 36,000 feet) cracks in the ocean floor. Most trenches occur at subduction zones, where one tectonic plate is thrust under another.

hydrothermal vents: cracks in the sea floor through which volcanically heated (to over 600 degrees!) water seeps. The minerals in the water recrystalize when cooled by the colder surrounding water, forming collars of rock in a chimney shape. Only recently discovered, these areas proved to be surprisingly rich in life.

bioluminescence: the production and emission of light by a living organism as the result of a chemical reaction during which chemical energy is converted to light energy.

camouflage: concealment by protective coloring or disguise to appear as part of the natural surroundings.

Resources on the web:

Robertson Witmer and Margaret Savas began working together at the 1991 Pacific Puppetry Institute. They have toured extensively throughout the Pacific Northwest with Tears of Joy Theater and Tales of the Caribbean. Rob and Margaret recently began working for Spyglass Theater, performing and giving puppet making workshops for schools and festivals.